Posted on September 19, 2017 by clairvoyanceetc

When my daughter’s paternal grandfather was alive he would ridicule me for my clairvoyance and say that there was nothing after death. He claimed that he knew this because he had died several times.

I was running a psychic development group in 1991. Someone “saw” my ex father-in-law. Actually what they described was a photo of Barney and his brother in their army uniforms. I was able to connect with Barney at this time. He was “saying” you were right and jumping around. I told him that this didn’t prove anything to me. I said “I know what you look like; I know what you sound like and I know what you think; show me something that I don’t know.” (Not out loud!)

Firstly he showed me one of my daughter’s horses that he claimed had gone through the meat works. I told him I wasn’t going to check this up. Too upsetting! He then showed me a “duck” and lifted the head off. He said “Where is the duck?”

But my mind went to something familiar. I associated this duck with a rocker duck that Barney had made for my daughter when she was a baby.  I tried to find out what had happened to the rocker. 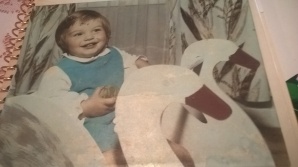 Two weeks later I went to my daughters for dinner. In the kitchen there was a biscuit barrel. A duck! And the head came off. I asked my daughter who had bought this for her. She told me Grandma and Granddad.

In January 1992 while I was sitting outside knitting. (This was my stopping smoking therapy!)

I “saw” my daughter’s paternal grandfather.

My initial response was “What do you want?”

He gave me some information pertaining to a male friend which is not relevant to this story.

He then told me that he was reincarnating as my daughter’s son in August.

Many years later my daughter had her first child. A boy; born in August . I had forgotten Barney’s message until a pagan friend whom had been sending healing to the baby wrote to me that there was a reincarnation link with this child. She thought it my daughter’s grandfather.

I know that there are many people who have similar stories to share:

I have many similar stories all making me question the nature of reality and life and death.