Thank God I am an athiest — ( punn intended)

Posted on November 23, 2014 by clairvoyanceetc

I wrote a blog sometime ago entitled Nephilim but deleted it.  To my dismay I haven’t found a copy of it anywhere.

I theorized in this (deleted) blog that humans have a God concept because they presume that there is an hierarchical structure:

And that all the old gods including “Yod He Vau He (Jehovah) were ET’s.

Last century I started writing a novel where the ET’s that created us were returning to cull or exterminate us because of the damage we have done to the planet. The means for our culling were specially programmed nannites. (This was long before the remake of “The day The earth Stood Still”)

Early this century I did a translocation meditation where  I chose to go to the Ophiuchus  system because this is the system the ET’s in my novel came from. It was the 5th planet in a binary sun system. In this meditation the ET’s I saw were not humanoid. (Humanoid is what I was expecting).

Difficult to describe them; they had a long necks; thick skin like a rhinoceros; four legs and were moving around in what looked like water but wasn’t water. I asked how they were so technologically advanced when they had no hands to manipulate with.

I was told they did everything with the power of their mind.

I was expecting them to be humanoid because of the Nephilim who were apparently giants. (See picture of skeleton)

I have no way of knowing whether what I saw  was just my imagination. 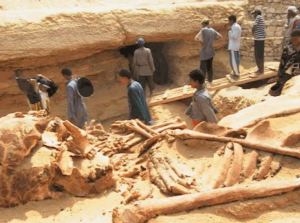 It was only at the beginning of this my 65th year that I admitted to myself that I did not believe in God. I spent the greater part of my life looking for my spiritual home. Wicca suited me because we respect the planet and the earth as our Mother. Well we did when I first started. Now that it is so popular, I think most “wanna bees” are only interested in spells and being different.

I have been trying to understand the nature of reality since I was seven years old.       I have had a few theories since then. In the 1990’s I used the analogy of us living in a virtual reality and of course when “The Matrix” came to the screen so many people recommended it. It was/is a creatively brilliant movie with subtle satire.

The fact that there isn’t a God doesn’t mean that we do not survive death. Considering that I see and communicate with those who have passed over: and have had instances of telling the person that I was reading for; something that they did not know. They usually told me I was wrong then later  contacted me to  tell me that I was correct. This proved to me that I wasn’t just reading their mind

After criticizing “wanna bees” I just realized one of the things that attracted me to “The Craft” was learning the skill of creating my own reality: I have since taught neophytes .  Intent is what matters and emotions are the power. Another thing I know is that “thought forms” gain a consciousness and reality of their own.

I will discuss this in another blog.

Suffice to say after six decades I still do not understand the meaning of life or the nature of reality. This reality just feels wrong, but it could be because homo sapiens have destroyed the ecology beyond repair?

It could be 42 –Hitchikers Guide to the Galaxy:  or Monty Python may have the answer — I of course am joking!

← What is the Nature of Reality?
Angels? →