It has been suggested that people with a university education are not stupid enough to believe in clairvoyance:

This is so not true:

(Ha ha! On re reading this it sounds like I am saying that people who  believe in clairvoyance are stupid — When I wished to say the opposite — that they are original thinkers)    😛

I was first introduced to this now called New Age stuff by a friend at teachers’ college: (I was a mature student and married with children)

I was loaned a book called “Seth Speaks” by Jane Roberts and taken to a lecture on clairvoyance and related subjects at the Gawler Institute. This was in the 1970’s.

In the late eighties when clairvoyance was becoming popular, I was asked to participate in a psychic fair in North Adelaide.

When I spoke to the organiser on the phone I thought “I recognise that voice!” and when we met, I certainly knew her: she had been my sociology tutor.

He was head of the dowser’s association.

The thing about clairvoyance is to be sceptical but not cynical.

“There are more things in heaven and earth, Horatio,

Than are dreamt of in your philosophy. “

Clairvoyance and communicating with those who have “passed over” doesn’t have to be taken on faith as religion does:

One can assess the information and decide if it is really the “dead” communicating.

I  recommend this DVD — The movie was made at the beginning of this century.

A wise friend pointed out to me how rare it is for people to give feedback on a book— I am so blessed.

I posted the following on FB 17th April

“I received a letter — well to be pedantic it was a card with a seascape — giving me positive feedback on my non fiction book today.

On Monday someone took the time to tell me how helpful and interesting my book was for them.

I have almost always had feedback on my clairvoyant readings but had not had many re book until now:

The following review has apparently been on my non fiction book since last August.

I only noticed recently

“Most helpful customer reviews on Amazon.com

Wonderful yet sad bits. But it is a testament to her life. I cry for the abuse she suffered. Horrific times. Bright Blessings to you Kathleen.”

As I have bragged about positive feedback on my book I think it only fair that I should share negative feedback;

Someone told me that they didn’t like my book:

that it was all over the place:

and that it looked like I thought of something and just wrote it down.

The criticism is valid:

I was going to republish with corrections but hadn’t saved the original template for the paperback;

With my sci fi short story I did it properly with a story out line etc.

With the non fiction I wrote the first part in one sitting for something to do because I couldn’t stand up:

So it definitely was NOT set out properly:

But the “all over the place” was deliberate.

And the second half I wrote as therapy for myself and wasn’t going to include it because I know that generally speaking people just don’t want to know about abuse.

You will not like my sci fi short story if you have religious beliefs or if you believe that humans are the only species that matter. 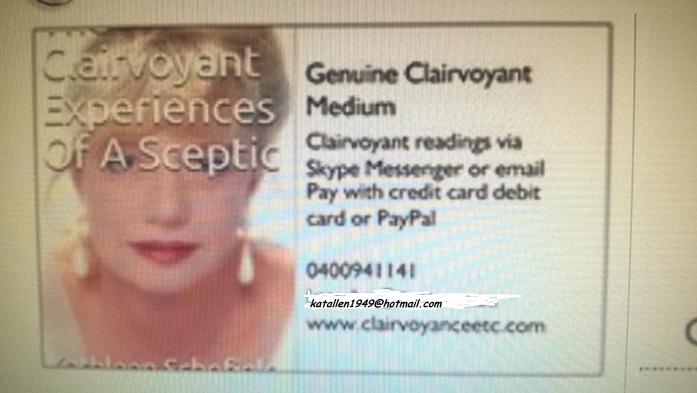 Since first offering email readings  I have had excellent feedback.

They are $60 Australian. (concessions available)

They are inexpensive for the same reason the psychic development classes are free.

(I do not agree with the Protestant ethic of making everything a money making concern; this attitude is part of the reason we are making all life extinct)

I am still able to see and communicate with people that have passed over on an email reading.

Please send a recent photo of yourself

I am able to accept overseas clients.

You may use debit cards, credit cards or PayPal

To purchase a gift voucher  just email me asking for same.

I saw an ad for John Edward  coming here (to South Australia) in November which said: “Is someone waiting to talk to you?”

and please be kind and respectful of non human life:

the continued existence of life on this planet depends on it.