Posted on November 11, 2014 by clairvoyanceetc

I wrote a blog yesterday but trashed it. I am just not happy with myself at the moment. I feel like my clairvoyance isn’t working at the moment.

Running psychic development groups I empathize with (and am excited for)  people who “see” or “get” genuine clairvoyance for the first time and  know it is real. So I decided to repost a questionnaire my youngest grandson gave me. 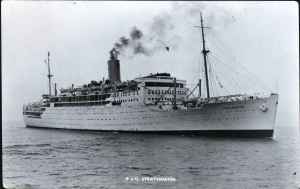 My youngest grandson aged 15 years, who lives in North Queensland, asked me to complete a questionaire for an English assignment. The idea was to interview someone who had an interesting life.     I was flattered and then surprised because he asked  questions about clairvoyance. This is a photo of the ship that I arrived at Outer Harbour South Australia on 2nd March.

Because my blog is “clairvoyanceetc ”   I am just including the clairvoyance questions.

When did you first realise that you had psychic abilities and do you recall your first experience and whether it scared you or were you intrigued by it?

In the 1970’s I was intrigued by psychic abilities. I read what few books I could get related to this. One was on quantum physics. A friend at Teacher’s College loaned me a book by Jane Roberts “Seth Speaks” and took me to lectures on spiritualism, Wicca & associated philosophies. These were run by a spiritualist minister and held at the Gawler Town Hall.  This was in 1978.

The borrowed copy of “Seth Speaks” was hard back with no pictures.  I visualized what Seth looked like. When I bought my own copy in paperback there was a portrait of Seth painted by Jane Robert’s husband in the book. He looked exactly as I had visualized him.

In retrospect I had flying dreams as a child and one experience that was definitely psychic when I was seven years old. It sounds like something I was just thinking when I explain it but it wasn’t. I was walking up Frome Road with my Mother & thought to myself I will be walking up here one day with my daughter. It felt like I was outside this reality. I never forgot it. Sounds like nothing when I tell it but it was a rather profound for a seven ear old.

I also always knew if someone was lying but thought that this was a normal thing.

My first experience was seeing someone’s aura at the Gawler institute. I also attended a psychic group run by the lady who ran the meetings at the Gawler Institute. She supposedly went into trance. It was so Fake!
I was very sceptical in those days and viewing a phony trance didn’t help give me confidence in this philosophy. But instead of just giving up I was able to get into a Spiritualist psychic development group run by a lady by the name of Stella Darwood.

Stella actually paid a lot of attention to me. Trying to help me to develop my clairvoyance.  The other older ladies in the group were not impressed. Just as now a days when this now so called “New Age” philosophy is the flavour of the century. Most people were coming from ego and  “one up man ship”.

At one session Stella said to me “What are you seeing?” And I said “Nothing”. Stella told me exactly what I was seeing!

It was a man wearing 19th century clothing and a flat cap with a peek; pulling a wooden wheel barrow. This amazed me because still being extremely sceptical I thought that what I was seeing, I was imagining.

Plus the image just flashed onto my mind & was gone.

This quick flash tied in with a theory put forth in a book that I had read before pursuing the Spiritualist path. That many realities exist in the same space but because the electrons are revolving at different speeds (per each reality) around the protons & neutrons the other realities are out of phase.

I have thought since the late eighties that we are in a “virtual reality”. Well, I consider this the best analogy for something I know I cannot understand.

If we don’t have a concept for something it doesn’t exist for us. I therefore just have to accept that there are many things beyond my understanding.

The first time Stella went into trance I saw her face change to a Mongolian looking man. I said nothing but the man next to me described exactly what I saw after the trance was over.

Stella had a Siamese cat who sat with the psychic development group. I noticed in future sessions that if someone was in genuine trance the cat would sit upright & pay attention. If it was fake the cat would not be interested.

There was one lady in Stella’s classes that went into genuine “trance”. Her face changed to an American Indian Sharman. I could see “him” holding what looked like a rattle. And ofcourse the cat paid attention.

Despite my experiences thus far and even though I saw guides with everyone in the room I was still skeptical and thought that I had an over active imagination.

In another group run by a lady named Blanche, I ‘saw’ a man (deceased) wearing wire rim circular glasses standing between Blanche and a lady named Cath.

This man showed me what I thought was a china ornament of “Cinderella”. My view of this ornament was changed so that I could see “wheels” underneath and a key in “her” back. Blanche was crying she said that it was the last thing her father had bought for her that he used to call her (Blanche) the dancing lady. Blanche told me that it wasn’t a china ornament. That it was plastic.

The incident that convinced me that clairvoyance was a reality happened at work. I was a student nurse at Strathmont Centre. I was washing dishes with a male staff nurse. We didn’t have kitchen hands in those days. It was 1979. Kym was 6 ft tall and rather heavy set. He had long blonde hair and dressed “Flower Power” style. A man (deceased) flashed in (when I see or hear things they flash in a fraction of a second) He had Kym’s high forehead and similar features but wore a suit with a crepe ribbon and a cross and had a short back and sides hair cut and dark hair.

I asked Kym if his father was a minister. He asked me why and initially I would not answer. I eventually told him what I saw and Kym told me that it was his uncle. He asked me what denomination his uncle was.

I did not know.

After Kym left the kitchen I asked his uncle what he had died of.  The words were that fast all I could make out was sclerosis. Because we were with the intellectually disabled I thought “tubular sclerosis?” Then I realized it was multiple sclerosis.

Kym said “Get more”! I informed him that I couldn’t.

Who else in your family has physic abilities, both immediate and extended?

Firstly I believe everyone has this ability but it atrophies because our culture denies its existence:

My Father was a Spiritualist and clairvoyant but did not tell me this until the late 70’s when I became interested. It wasn’t something a man of his era would want to admit to, due cultural taboos. Dad was interested and knowledgeable about quantum mechanics (now called quantum physics)

Both my children have clairvoyant abilities.

I have run psychic development groups since 1990.  Clairvoyance improves with practice just like anything else. I enjoy that people are amazed that they can really “see” things. Every person in all my groups has at least been able to “see” auras.

What has been your most memorable experience when giving a reading to someone?

There are of course many; I respect peoples confidentiality when doing a reading. Also I tend not to remember peoples readings: Other clairvoyants say the same. Probably to protect the client and also not to take on other people’s problems.

I will describe three; one very upsetting; one that I was told was wrong to begin with; and a funny one.

I read for a lady whose son had died. Off on a tangent – (When this lady first came to me I told her she would have to come back in four months. Her son had only died two months ago the first time she came for a reading. Spiritualists had taught me that people had to be dead six months before they could make contact. This isn’t true.  A year later I was reading for someone whose husband came through amazingly clearly. I asked how long he had been “passed over” and was told nine weeks.) Back to the story: One of the things this lady’s son did was point to the head of his grave. She told me that there was nothing there! I pointed out to her that I wasn’t to know that her son had been buried. The following day I received a phone call from this lady. She told me that she had gone straight to the grave after her reading. His girlfriend had put a headstone on the grave saying “His loving Wife” and not mentioned any of the family!

I was reading for a young lady. Her father was one of the people that came through. He kept showing himself sitting on a long drop toilet: pants around his ankles; reading the paper and smoking. I didn’t feel comfortable “giving this off”

But he insisted it was a family joke. When I told the girl she explained that her grandfather had put kero down the long drop. Her dad got off the toilet throwing the cigarette butt in and blew up the building!

What do you feel when you are communicating with spirits and does it heighten your senses, if so can you explain in simple words?

Difficult to verbalize; It varies depending on who I am reading for. It is generally uplifting. One lady that I read for said that I “faded in and out”.

Do you find that upon meeting someone for the first time your physic abilities raise your senses that tune you into any bad vibes this person gives off, for instance have you ever met someone that you have instantly felt bad vibes from and that they made you feel frighten or scared or that they were just not a nice person

What has been the best thing that being a physic has brought to your life?

I know that we somehow survive death. This applies to all life forms! Although I acknowledge I do not understand the nature of reality. I am also sometimes able to communicate with my parents.